Last Tuesday I took myself back to the Royal Academy of Arts to see the current exhibition of Lucian Freud – The Self-portraits. As I have dabbled in portraits myself I thought this would be a good place to get myself back into painting again. I haven’t done a self-portrait in a long time and this exhibition certainly inspired me to get started again.

The first Lucian Freud painting I ever saw in my life was one of his later works called Eli and David a portrait of David Dawson and his whippet Eli. This was in a small show at the V&A along with paintings from Frank Auerbach, when I worked at the V&A in 2006 as a gallery assistant. I remember working at the exhibitions private view and Lucian was there, the 2nd time I had come into such close proximity to a famous artist, I was in my element. I remember working in the paintings gallery starring at Eli and David for hours at a time, fascinated by the way Lucian captured David’s expression through paint. A painting that had caused the sitters consciousness to emanate, a truly brilliant piece of work.

Lucian Freud is one of the greatest realist painters of the 20th Century who has dedicated his life to the preoccupation of the human face and figure of family, friends and lovers. Most importantly he returned to self-portraiture over an over again over his life span.

The exhibition situated in the Sackler Gallery of the RA documented his self- portraits from 1940 when he attended art school after being expelled from Bryanston School in Dorset, to Freud’s late self-portraits in the 1990’s. You could see his confidence with paint develop from start to finish of the exhibition. What I hadn’t seen before was his ‘Man with a Feather’ (1943), which revealed his interest in Northern European painting of the Renaissance.

Lucian Freud, Frank Auerbach and Francis Bacon were associated with each other and I have admired their dedication to their style as during their time they worked against the grain when Abstract Expressionism and then Conceptual and Experimental Art where in vogue.

Things I like/learnt about Lucian Freud:

Ability to capture expression and character –The light and shade -His flesh detail – The sitters gaze – The unexpected compositions – Vigorous brushstrokes – The fact that Freud found self portraits challenging – The drama created by paint – The fact he required his sitters to be present even when he was painting the backgrounds – He rarely took on commissions – and finally the time he dedicated to portraits. David Hockney’s portrait took 130 hours to complete.

Lucian worked with mirrors to document his autobiographical life capturing his consciousness that would be difficult to do using photographs. In 1975 he began to use Cremnitz White, a granular looking paint that created a texture and structure giving that relief on the flesh of the human form. I found he texture slightly disturbing and preferred his fluid use of paint he did in the 1960’s. I was fascinated by the way he folded the skin and his colour use where you could see a mixture of tones in one brush stroke. For me the Cremnitz white began to create a sculptural element that was a step away from the 1950-60’s paintings when his style become looser. At that point he had lost the narrative and symbols is his early work and concentrated individually on the sitter.

In Lucian Freud’s ‘Some thoughts on painting’ 1954 he says, ‘my object in painting is to try and move the senses by giving an intensification of reality’. He talks about understanding and feeling the person or object and I feel he has certainly achieved this in his works. You feel like you have an understating of the sitter. 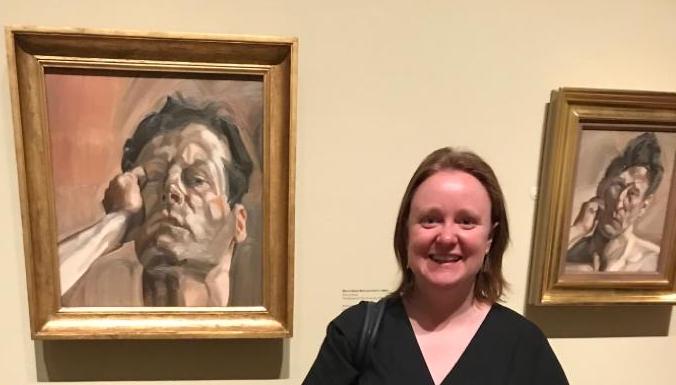